Spreading Awareness About Water Voles To Help Stop Their Decline

The following is a Guest post by Ross Stevens, on behalf of Total Ecology who undertake surveys for water voles and otters at http://www.totalecology.com/mammal-survey/. Thanks Ross! 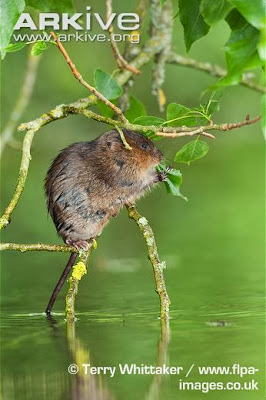 Water voles finish their breeding season in October. From then on, throughout the autumn and winter, all the territories that have been created and defended throughout the spring and summer cease to exist. Many of the tell tale signs of water vole activity disappear, including latrines. Latrines are piles of flattened droppings that an adult will uses to mark its territory and these are maintained throughout the breeding season.

Water Voles don’t hibernate. They remain active through out the cold months, however they spend most of their time underground within their nest chambers. In winter the colony will often contract, so that adults that were previously territorial now live side-by-side within the same burrow system. They normally choose a place where they will be safe from flooding, where they can dig burrows higher up the bank sides away from the waters edge. If winter grounds are not chosen wisely then a severe winter flood can result in a whole colony of water voles being flooded out and lost. In this situation, if they don’t actually drown, then they are usually picked off by one of the many animals that feed on them. The most famous water vole predator is the American Mink, which escaped or was released from fur farms during last century and is now widespread throughout the country.

Flooding is not the only problem a colony will face over winter. Less vegetation means less cover to protect them from predators, but more importantly it means less food. Water voles will eat a wide variety of plants, however tree bark, especially willow, provides an important food source in winter. It’s at this time of year that water voles will also turn to the roots and bulbs of plants in order to survive the winter months and in autumn fallen fruits are a favourite. 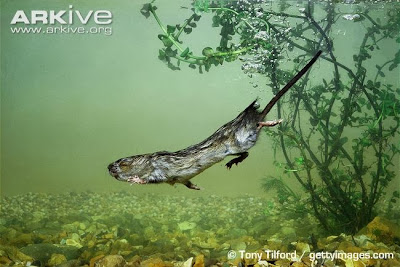 A whole colony living in one place makes them far more susceptible to persecution. Water voles are far larger then field voles, bank voles and mice. They are only slightly smaller then a rat, so are far too often mistaken for one. Colonies of water voles are often dug out, or poisoned, or killed by terriers. Thought to have undergone a 94% decline, the water vole is now one of the most threatened mammals in the country. This harmless vegetarian does not spread diseases like rats do, so please think carefully before putting poison next to a watercourse or any water body.

It is thought that a water vole needs to obtain a weight of at least 170g in order to survive the winter. This means that those born earlier in the year have better chance of survival. A water vole rarely survives more then one winter, but very occasionally they may survive 2 or even three. All in all, it seems that winter is a hard time for a water vole. It is actually thought that up to 70% of a colony is lost over winter, leaving just a few individuals to set up breeding territories again in March.
Posted by Greg

Hello, thanks for taking the time to view my profile. I am an academic writer from the US who enjoys finding new topics to research and write about.
Medical Science Homework Help

Good way of telling, good post to take facts regarding my presentation subject matter, which i am going to deliver in my college
Matlab Online Help

I appreciate your efforts in preparing this post. I really like your blog articles.
Histogram Statistics Help

Great Information,it has lot for stuff which is informative.I will share the post with my friends.
Operations Management Assignment

You always surprised me with your blogs.You got an amazing mind and experience that you have shared in your blogs.I like to read your blogs every time.
Economics Homework Help

MathCad Online help
Science Channel’s are giving a complete knowledge to its viewers about every thing students write done dissertation on this subjects and show its importance.

Easily, the article is actually the best topic on this registry related issue. I fit in with your conclusions and will eagerly look forward to your next updates. Just saying thanks will not just be sufficient, for the fantasti c lucidity in your writing. I will instantly grab your rss feed to stay informed of any updates. custom website design service

Good post !! I appreciate with your article writing,here its my first visit and i found a great information here.

Nice post, impressive. It’s quite different from other posts. Thanks for sharing. For more information visit herbal incense for sale

I'm constantly searching on the internet for posts that will help me. Too much is clearly to learn about this. I believe you created good quality items in Functions also. Keep working, congrats! His Secret Obsession

Great work. Truly speaking I never seen a blog like that. Absolutely superb work. Good luck. Thanks for such an informative post. For more information visit k2 incense

We checked out this website http://freetripdeals.com/and got good rates for our Hotel and Flightbookings.

Most of the people are thinking that water voles are harmful mammals and we are placed with poisons to kill them. But you shared another category of these mammals i.e, vegetarian voles which do not harm our country. You have explained the importance of raising awareness of categories of water voles to stop their decline. I also agree with you. Thanks for giving this valuable information. Apart from this article, I learned about hammerhead shark which is the largest of all hammerhead species.

Donate to help save endangered species. 100% of all donations go to help preserve our planet's biodiversity.

Comments
Want to help make this site better? Want to contribute to this site? Please let us know. (notextinctyet@gmail.com)